Game launches in West on August 26

The game will get a Digital Deluxe Edition that includes a Booster Item Pack and bonus story arc: “The Lost Numbers” The Premium Edition includes those items, as well as a costume and BGM pack, bonus demon pack, Ai-ho Demon, and Mary’s Maid Frock Outfit. Pre-orders are available now. 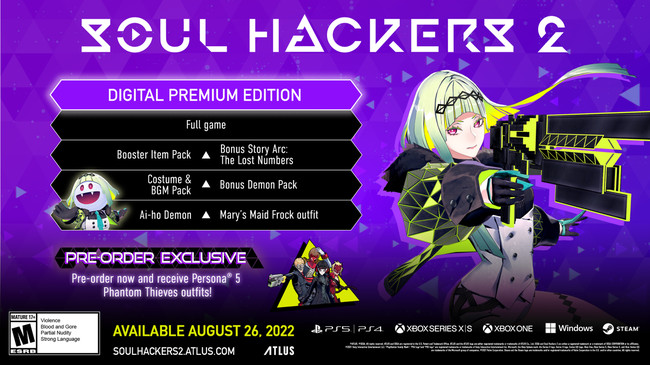 In a war between Devil Summoners, it’s up to Ringo and her team to decrypt destiny and save the world from apocalypse!

Atlus released the Devil Summoner: Soul Hackers game as part of its overall Shin Megami Tensei franchise for Sega Saturn in 1997, PlayStation in 1999, and Nintendo 3DS in 2012. Atlus released the 3DS version in North America in 2013.

Atlus released the Shin Megami Tensei: Devil Summoner game for Sega Saturn in 1995, and then released it for PlayStation Portable in 2005.