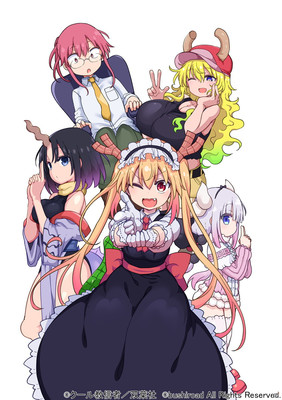 Aksys Games announced on Wednesday that Kaminari Games’ Kobayashi-san Chi no Maid Dragon Sakuretsu!! Chorogon Breath, the scrolling shoot ’em up game based on Coolkyoushinja‘s Miss Kobayashi’s Dragon Maid (Kobayashi-san Chi no Maid Dragon) manga, will launch in English for PlayStation 4 and Nintendo Switch in the West on August 25. First run physical copies will include a card from the Weiß Schwarz game.

After receiving a cryptic email, Miss Kobayashi and her maids go to Takiya’s house to investigate. There they are mysteriously (and overdramatically, let’s face it) sucked into the PC.

The game launched in Japan for PS4 and Switch on March 24.

The limited first edition of the physical packaged edition includes a guidebook, bonus exclusive manga by four creators, and a Weiß Schwarz PR card in an exclusive illustrated box.

Coolkyoushinja began the ongoing Miss Kobayashi’s Dragon Maid manga in the inaugural issue of Monthly Action magazine in May 2013.

Seven Seas Entertainment is releasing the manga in English.

The series inspired an anime adaptation by Kyoto Animation.