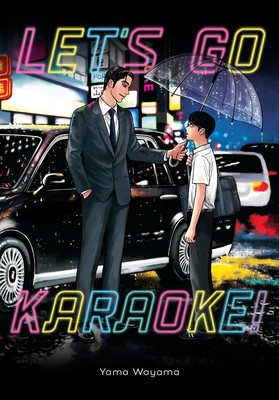 Kadokawa announced on Friday that Yama Wayama‘s Let’s Go Karaoke! (Karaoke Iko!) manga is inspiring a live-action film that will open in 2023. Nobuhiro Yamashita (Linda Linda Linda, live-action Cream Lemon film) is directing the film, with a script by Akiko Nogi (INU-OH, Library Wars, live-action I am a Hero film).

The staff are holding auditions for the role of protagonist Satomi Oka. Boys (with or without professional experience) between the ages of 12 and 16 can apply between June 14 and July 15.

Nothing worries Satomi Oka more than the upcoming final choir competition of his middle school career—right up until he is accosted by a stranger from the shadows who demands, “Let’s Go Karaoke!” As a yakuza, Kyouji Narita doesn’t scare easily, but a terrifying prospect has driven him to seek Satomi’s help. The boss is holding a karaoke contest, with the loser forced to get a tattoo to be selected and torturously applied by the boss himself! Oka has been to many vocal rehearsals over the years, but never one-on-one karaoke sessions with a gangster!!

Wayama released the manga as a dōjin publication in 2019, and Kadokawa published it in September 2020. The manga came in third place for the 14th Manga Taisho awards in 2021. The manga has 500,000 copies in circulation.