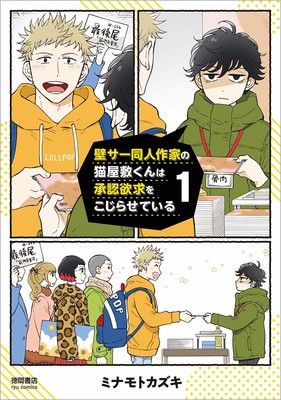 Tatsunori Satō is will be one of the directors for the show. Shinya Hokimoto is penning the scripts.

The manga centers on the relationship between manga creator Kōniku-sensei (real name Mamoru Nekoyashiki), and popular male idol Issay (real name Issei Kazama). Nekoyashiki is popular in indie dōjin manga events, and he uses his popularity to satisfy his need for public approval. He reunites with his childhood friend Issei at one such indie manga convention, after being apart from each other for five years. The “kabe sa” term in the title is short for “kabe circle” (wall circle) — a slang term for indie manga groups or “circles” that are popular enough for their booths to be placed beside the wall of the convention, for ease of line management.

Minamoto launched the manga in Tokuma Shoten‘s Comic Ryū website in 2020, and it is ongoing. Tokuma Shoten will publish the manga’s fourth compiled book volume on June 13.