Need a rare Danganronpa Monomi plushie from Comiket or a custom-made extra large kimono?
How about some ’90s Gundam fanzines from Denver Anime International or a copy of Mario
Teaches Typing? You can find it at the Anime Boston Swap Meet — and it can be yours if you
have something worth trading in turn. 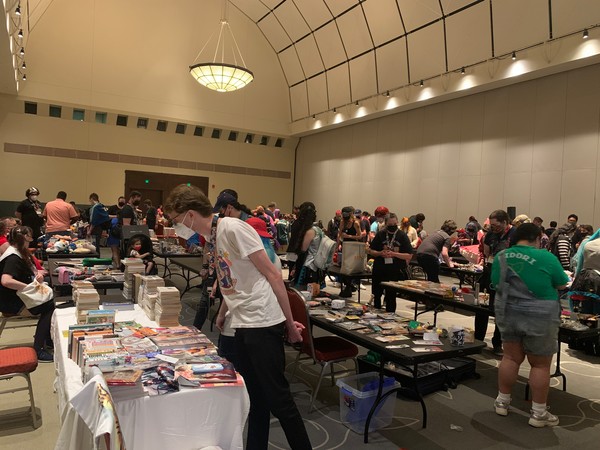 Anime Boston has been hosting the Swap Meet since 2007. It’s held on both Friday and
Saturday nights, and has shifted to different locations over the years. This year, it was held in
the Panel A ballroom of the Hynes Convention Center, a spacious area which hosted cosplay
meet-ups during the day and a “Slumber Party” later at night. On Friday, there were complaints
from some traders about long lines and lack of set-up time, but once the doors finally opened,
everyone seemed to relax and things went smoothly.

Jeff, one of the event’s co-founders, describes its genesis as a means for Christian Daly, the
con’s Director of Exhibits and Dealers’ Room Manager, “to get rid of a bunch of junk that was
clogging up his closet.” Jeff says he got involved because “I don’t know the first thing about
anime,” and his main involvement has been as an MC and salesman, making jokes about the
weird items people bring up to him to help sell the “junk.”

Christian took inspiration from Anime Weekend Atlanta’s “Super Happy Fun Sell” to develop the
Anime Boston Swap Meet. Unlike that yard sale/flea market-style event and some similar events
at other conventions, the Anime Boston Swap Meet is trades-only and prohibits any cash
purchases due to tax rules (though rumors spread about certain booths breaking this rule). “It’s
sort of a social event,” says Christian, “because people have to talk to each each other and get
to know each other a little bit.”

The Swap Meet has built up something of a “weird community,” in Christian’s words, with people
returning to unload and/or build their extensive collections year after year. Speaking to various
dealers, I found a mix of regulars and relative newcomers. Gina, who was happy to acquire the
your name. manga and was trying to find a new home for a Fullmetal Alchemist plush, has been
attending for 10 years; Juliette, who came to the Swap Meet at night after working in the
dealers’ room all day, has gone for seven. Patrick, who focuses on manga and toys, and
Thomas, who has been selling memorabilia on eBay since being laid off during the pandemic,
were both attending for the second time, having come in 2019 and now finally able to return
three years later.

For otaku short on money but high on fandom, the Swap Meet can yield incredible rewards. The
most strategic can seriously “trade up” — Jeff and Christian recalled a time where someone
arrived with just a paperclip and after making several trades with multiple different booths, left
with a Gundam! From Weiß Kreuz cards to Love Live! collections, the wide variety of items on
display at the Swap Meet prove that one nerd’s trash is another nerd’s treasure.