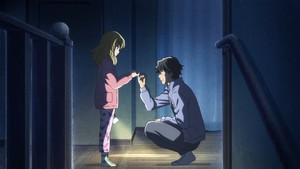 As a rule, I don’t tend to like Christmas episodes, so if one works for me, it must be pretty special. That feels like the case with this one – while it doesn’t veer too far out of the schmaltzy feel-good norm for Christmas-themed stories, it still plays with that enough to make it Deaimon‘s own take on the staple, and that absolutely works in its favor.

At least part of that is because of the way it compares and contrasts how the holiday is celebrated in Japan versus Christian-majority countries. The idea that it’s specifically a family holiday in the west as opposed to a romantic one comes up, as does the basic trappings such as the decorated tree and roast chicken. (Full disclosure: while I know that fried chicken is a Japan-specific Christmas thing, I have no idea about roast chicken. It’s not a holiday my family observes.) Nagomu as a kid apparently completely bought the holiday propaganda and was sad that his family wasn’t willing to go along with it; now as an adult he seems pretty okay with whatever comes around – he’ll be excited for the tree Itsuka’s mom sent her and happily go see the illuminations, but he’d probably be just as happy to go out for a Japanese-style Christmas date and eat wagashi.

Speaking of those illuminations and Christmas dates, Nagomu gets himself into both when he overhears Mitsuru practicing to ask him out and accepts. He seems to do it in his usual Nagomu way (i. e. without a ton of forethought), but he does appear to realize that she probably asked him as an official date, which frankly is progress for him. When he bumps into Kanoko and brings her along, it looks like his usual obliviousness, but the offhand comment he makes to Kanoko about it potentially being awkward if it was just him and a teenage girl lets us know that he was aware of what he was doing when he brought along a third wheel. Whether you see that as growth or not is a matter of interpretation, but I do think that his time with Itsuka has helped him to think a little deeper about things in his life. He’s taking his parents’ suggestion that he be like a father to her seriously, and that forces him to grow up in a way that’s different from just moving out or getting a job. Suddenly caring for another person (or cat, dog, goat, whatever) means that you have to realize that you aren’t the only one who matters in your life anymore. For some people, a serious relationship can provide that lesson; while I’d argue that Nagomu was at least started on that road with Kanoko, Itsuka is the person who really seems to be making him try.

And we do see evidence that Nagomu wasn’t a total jerk of a boyfriend to Kanoko – the scene where he apologizes for always having a concert on Christmas Eve shows an awful lot of earnestness. I’m still not quite sure where they went wrong, since their breakup almost certainly didn’t come out of nowhere, and maybe that’s something Kanoko is starting to think more deeply about, too. She’s definitely experiencing remorse at having let him go, she’s trying to respect his relationship with Itsuka, and her move to Kyoto may be the closest thing to an apology that she can handle right now. It’s interesting, and the way that it parallels Itsuka’s relationship with her estranged mother makes it even more so; both are relationships based on love that somehow didn’t get communicated, and seeing how the characters try to make it work may turn out to be the heart of the show.

Nagomu’s soothing song at the end feels like the melancholy (but beautiful) prelude to episode ten, which covers two separate storylines that both deal with death and aging. It feels appropriate following the Christmas episode, because the new year is a symbol of the cycle of life: one thing ends so that another can begin. In the first half of episode ten, we see that as Nagomu offers a bereaved man the wagashi that he made for practice – he claims the man as an acquaintance so that he can just gift him the sweets, because he doesn’t believe that they’re good enough to sell. While they don’t look as picture-perfect as the ones made by Masa-san and the other old men, they’re hardly deformed and awful, so the point here seems to be that Nagomu doesn’t quite appreciate his own skill because he’s always comparing himself to someone better. Coming from a character who’s an artist (in the musical sense), that tracks, because to pursue a creative field is to feel like there’s always someone better than you…even if your perception of how much better than are is skewed. We don’t know precisely who Nagomu is comparing himself to, but we do know that he feels at least a little guilt over having left for Tokyo to make music, and now he feels like he can never make up for those years. But rather than them being lost, they were just another leg of his journey, something borne out by both the bereaved gentleman finally going to visit a family grave and the arrival of Umeka at the shop.

Umeka’s the granddaughter of a man who was in the neighborhood forty-odd years ago, involved with a young geiko. He’s now nearing the end of his life and wants to return to her a memento of their time together, the memory of which was trigged by a specific plum-based wagashi. Like with Nagomu’s overall journey and with the tragedy of the man visiting a grave, the old man is looking back on what he perhaps feels he should have done differently years ago. But rather than bearing this out, his gift shows us what Nagomu ought to be learning: that every step on the road is valuable and that there’s not really such a thing as “too late.” Yes, things didn’t work out for the couple in the past, but they both lived what look like happy lives. It’s sad that they didn’t get be together, but not an irredeemable tragedy – like Nagomu’s own choice to leave the confectionery for a time. Even his father recognizes that Nagomu isn’t doing anything wrong with his life, and the symbolic nature of the plum blossom wagashi and Nagomu’s gift of new year’s sweets let him know that he’s still on his own path.

We’ll see a bit more about that next week, when it looks like we’re going to get both confirmation that Itsuka’s dad is Nagomu’s senpai and some major backstory. Until then, join me in wondering why the subtitles this week chose to translate “ume” as “ume plum” rather than just “plum.” I’m willing to believe that “ume” refers to a specific variety, but I don’t think that’s actually the case here.


Deaimon: Recipe for Happiness is currently streaming on
Crunchyroll.