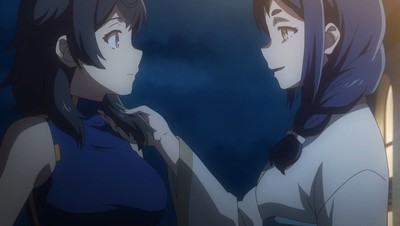 ”At the Evening Ball” is an entertaining and mostly satisfying continuation of the Libelle Arc that The Executioner and Her Way of Life has been running with for a few episodes. We’ve got just enough breadcrumbs to keep us on track for the next stage of the plot, and there’s even a solid action sequence for us to chew on while the gears continue to rev up for the story’s bigger plans. I still have reservations about the pacing of this story arc, but they’re not enough to keep me from having a lot of fun with this show from week to week.

Generally speaking, I’m always down for a good ol’ fashioned ballroom caper (and any Dragon Age fans will instantly know what my absolute favorite part of Inquisition was). If I had to make a major complaint about how “At the Evening Ball” plays out, it would be that we don’t really get enough of Menou playing mind games on the dance floor. It only takes a few minutes for Ashuna to show up and pull Menou into a fight that takes up most of the episode, leaving Akari to wait around until Manon comes to do her vaguely menacing shtick. The most productive member of the squad this week is, yet again, Momo, which maybe isn’t surprising at this point, but I still would not have minded if our other heroines got a bit more to do so far as moving the plot forward.

That being said, if Menou was going to be stuck fighting a single character for half the episode, Ashuna was probably the best choice for a foil. For one, it finally allows for the two warriors to actually meet each other, and both women are more than capable of holding their own on the battlefield. The only issue with the fight itself is that it feels like padding; there’s really no reason for Ashuna to be picking a fight with Menou, and the princess’ brash theatrics do more harm than good to the investigations that all of our protagonists are supposed to be prioritizing. Still, it’s a fun fight, filled with the usual bits of strategic monologuing and magical trickery that make for an entertaining bout in shows like this. I also liked the detail of Menou using sorcery to hide her face for the fight. It might not have done any good, since Ashuna still easily figures out Menou’s identity, but those added layers of motivation and character interaction are always appreciated.

Akari’s share of the story is just as stalled out as Menou’s, since the only action that Akari takes to actively move the plot along comes at the very end of the episode, but there are at least some cool character moments and lore implications to tide us over. If the title for next week’s episode didn’t spell it out enough for us, Manon’s comments about Akari’s black hair make it pretty obvious that Manon’s mother was also a Lost One from Japan, which also makes it easy for Manon to pick up on Akari’s origins as well. It’s not quite enough to make Manon an especially compelling character yet, but it’s enough to get True Akari out and engaging with events again. While I think the pacing of the exposition has been somewhat clumsy for the past few weeks, it is still interesting to learn that the vast majority of what has gone down in Libelle has never occurred in Akari’s previous jaunts through time, which makes her a lot more vulnerable now, even at full strength. There’s a lot of potential to be had with that setup; all that remains is to see what the show does with it.

Then there’s Momo, who is easily the most successful at actually doing her job this week, as she is able to handily uncover Manon’s secret monstrine production facilities, including the super sketchy iron maiden setup that we saw a couple of weeks back. We still don’t have enough context regarding the little girl in the maiden to get properly invested in the mystery’s most critical elements, but it feels like progress is being made.

Plus, Momo getting injured in the line of duty is an effective way to raise the stakes, even while the show still feels like it is in the ”setup” phase of this story. It means that, even though the last few episodes haven’t been the best run that Executioner has had so far, there’s still enough cool stuff going on to keep us on the hook for another week. It’s not S-Tier Television, but it’s far from a terrible place for Executioner to be, either.


The Executioner and Her Way of Life is currently streaming on
HIDIVE.

James is a writer with many thoughts and feelings about anime and other pop-culture, which can also be found on Twitter, his blog, and his podcast.