How would you rate episode 9 of
Healer Girl ? 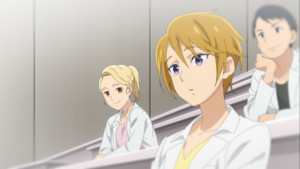 After several weeks of hanging around and doing decidedly un-Healer-focused things, it’s at last time for a return to the part of this show’s title that isn’t just “Girl.” Now don’t get me wrong, niggles aside I enjoyed both Reimi’s personal drama and the school festival, but it’s still a bit baffling that this show – presumably only running for a single cour – has spent so much of its runtime doing stuff entirely disconnected to its central premise. I get why the creators would want to focus on the singing aspect in isolation – it’s for sure more marketable and entertaining than lengthy lectures about the process of cellular regeneration – but like, you kinda pitched this show to be about characters training to be White Mage Bards, you should probably get back to that at some point, y’all.

Well, Healer Girl heard my complaints and decided to dump our main trio right into the deep end by participating in an actual surgery. And not like last time, where they were basically casting buffs for the surgeons, but honest-to-medical-malpractice helping to heal incisions and restrict blood loss during the surgery. Sure, Kana and the others are technically singing backup for Ria, but they’re still participating in what is, by all appearances, a groundbreaking advancement in medicine that’s never been attempted in this way before. That’s kind of a big leap from healing boo-boos and helping people from hyperventilating, guys. It’s little wonder that, despite initially seeming all for joining in, all three of the girls very quickly start to buckle under the pressure. Taking somebody’s life in your own hands (er, vocal cords) is something adult doctors with years of medical training and hundreds of hours of simulations still worry over. It’s a credit to Kana, Reimi, and Hibiki that their brains didn’t pop like overinflated balloons.

Though the actual operation turns out to be less dramatic than you’d expect. Or at least less dramatic than I expected, given how nearly every other medical drama ever produced would play out something like this. I spent pretty much the entire surgery waiting for something to go wrong – either for Ria or one of the girls to make a mistake or falter, and for things to start going to hell. But Healer Girl seems to think an experimental surgery is tense enough without sudden complications, and instead uses this sequence to show us Ria at full power. Like we’ve been told before how good of a Healer she is, but here we really get to see The Witch in action, and damn if she doesn’t earn that nickname and then some.

If I’m being honest, most of the Images we’ve gotten so far have been pretty underwhelming – maybe that’s by design, as we’ve only been following young practitioners who are still learning the ropes, but it’s still been kind of a let down whenever they showed up. But here, with Ria leading the show, things come alive like they haven’t since episode two. It’s another moment where the sheer energy of Healer Girl‘s construction just sweeps you away. The animation, the score, Ayahi Takagaki‘s singing – it all combines into a show-stopping performance. You’d never think gastrointestinal surgery could be as cinematic as The Sound of Music, but that’s the bizarre little niche this series exists to fill, and here it does a damn good job of it.

Outside of hallucinogenic enterectomy, there’s also some solid, if subtle, character stuff going on here. You’d never get her to admit it, but even Ria starts to buckle just a little during all of this, and it’s Reimi who comes in clutch to keep her idol on her feet. It’s neat that the patient the girls are helping is the doctor who first started helping treat Kana’s asthma as a kid too, and I hope we see a bit more about that as we go forward. It was also just super sweet how Ria comforted her apprentices when she saw them wearing thin, and just how impressed she was when they stepped up during the surgery. Altogether it makes for a solid return to Healer Girl‘s actual premise, and I hope we can continue that trend as we head into the end of the season.