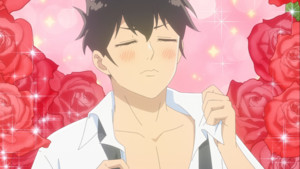 For all that we can technically call Aharen-san a RomCom, I’s leaned almost solely on the latter half of that moniker so far. Outside of an occasional blush and just general knowledge of how these kinds of series go, there’s been little to suggest Raido and Reina’s relationship is anything besides a tight friendship between weirdos on matching wavelengths. Sure, Momo-chan-sensei thinks they’re destined to be together, but I’m sure she says the same thing of all the ships she follows on Archive Of Our Own, so she’s not exactly a reliable source. But with this episode we finally start to sink into some honest-to-goodness ship-teasing with our central duo, and it’s not even spurred on by the unexpected return of Sexy Raido.

Instead we get it through Raido finally meeting the whole Aharen clan as he goes to visit Reina while she’s sick. And what follows is a pretty subdued episode even by this show’s laidback standards, at least on the comedy front. Sure, there’s some solid jokes to be mined from Eru’s resting murder face – my favorite is Raido reflexively raising his hands like she’s got him at gunpoint, and that weird little plushie doing the same – but overall way more screentime is spent on sincere and earnest conversations between Raido, Reina, and her siblings. While that means this probably won’t ever be my favorite entry in this series, it works surprisingly well, and shows that these characters are likable enough to carry the show without nonstop gags.

Or maybe I’m just a sucker for awkward kids discovering their feelings. Plus Aharen-san takes a fairly novel route with its shipping fuel. There are no fake dates or pratfalls into intimate situations – that’s firmly in the realm of Momo-chan-sensei’s fanfic brain rot – but instead the “romance” comes from Raido basically being welcomed into the Aharen family as soon as he arrives. Eru’s understandably critical of her little big sister’s crush, but she doesn’t get unduly aggressive towards Raido and gives him an honest chance to introduce himself. She’s attached and protective of her sibling, but Eru’s not a grating caricature who exists solely to get in the way, and seeing how much Raido means to Reina helps assuage her concerns. That’s a sweet way to both establish their sibling relationship and get us all the more invested in our central couple, and it continues the show’s dedication to making all its simple cast lovable and supportive.

Meanwhile Ren has already basically adopted Raido as his new big brother-in-law, complete with an impromptu shopping trip. Like the rest of the episode this is fairly light on jokes, but the gag about Raido’s empty wallet managed to kill me almost as hard as his “missing” phone last week. More importantly it provides the setup for Raido doing that classic anime romcom maneuver of calling Reina by her given name, which is the ultimate move powerful enough to crack her stone facade. Look at that blush. It’s amazing. It’s phenomenal. No notes. It’s the perfect cap to a sedate, but nonetheless fulfilling break from formula for this show, and if there’s any justice in the world these two will become the true OTP of this season.