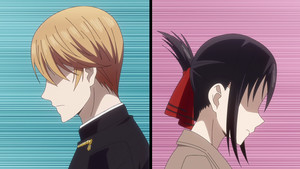 Do you smell that, everyone? Cause it smells like the climax to almost three seasons’ worth of buildup is just on the horizon! I’m just gonna say this now: if this season cops out of a big emotional confession from both of these stubborn teenagers I’m gonna be very, VERY mad. This episode basically acts as the prologue for the Culture Festival Arc which will probably take up the remainder of the season. We start off with Shirogane’s sister being the biggest tsundere to ever tsun. She goes on and on about how much of an embarrassment her brother is, but it’s painfully clear that she appreciates everything that he does for her.

But the real emotional high point of this episode was Kaguya straight-up admitting her feelings for the president. I love how even the narrator is surprised at Kaguya basically taking the golden line that this entire show started on and just starts skipping rope with it. We know that Shirogane has already more or less admitted to us viewers that he has feelings for Kaguya, but he is still sort of treating it like a game since he’s only going to confess if Kaguya doesn’t by the end of the festival. Kaguya seems to have taken her feelings a bit more seriously, not only admitting those feelings but also straight-up contemplating that she needs to put her pride aside for the sake of being happy. She really loves this exhausted boy, and I like how she is able to properly articulate to herself (and the viewers) why that is. All the pieces are in place right now, and it looks like we’re about to see the fireworks to the biggest match the show has lit so far!