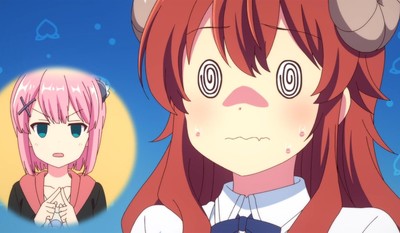 Thank the Lord, The Demon Girl Next Door is back. It may have only been gone for one week longer than usual, but in the year 2022 that may as well have been a decade. I’m sure I’m not alone when I say that, these days, we need to take whatever scrap of joy and brightness we can find in the world, and that’s exactly what TDGND is here to provide.

The first half of “A Short Break!! The Demonic Summer Festival” is one of the most, er, “experimental” bits that the show has indulged in yet, offering multiple-layers of meta as Lilith encourages Shamiko to recap the events of the plot for the audience, even as Shamiko is stumped about what “audience” she could possibly be speaking to. We go from a goofy (and kind of overlong) zombie movie parody that literally has nothing to do with the events of the show to Shamiko’s hilariously feeble attempts at rapping, and the results are…fine? The random decision to spoof zombie movie cliches was fairly amusing, even if it feels like a gag from a totally different show, though I feel like the English-heavy rap number plays better for the show’s non-English-speaking audience. It’s not a bad sketch—I don’t know if TDGND is even capable of producing genuinely bad material, at this point—but it isn’t the series at its absolute best.

The second half of the episode consists of more traditional hang-out sketches, and I think they’re much more successful. I’m a teacher, so I can relate to the feeling of not quite knowing what to do with yourself once summer break kicks in, and while the ultimate solution to Shamiko’s woes was quite predictable, it was still sweet as heck. Of course the secret sauce to the recipe for a perfect summer break is friendship. Our poor heroine has spent far too many summers bereft of companionship, so it’s damned nice to know that she has a girl squad to hang with now. Festivals are always fun to see in anime; plus, I’ll never turn down an opportunity to see Lilith running amok in the physical world.

The final story of the episode is the best one, though, since it gives us the most Shamiko/Momo time, which is an absolutely invaluable commodity. Am I saying that, as both a student and a teacher, I can viscerally relate to the stress that comes from putting summer work off until the absolute last minute? Absolutely. The #BigMoodVibes aside, though, it’s just nice to see our girls finally have some time to recoup after Momo’s brief turn to The Dark Side. We learn a bit about Momo growing up as Sakura’s adopted little sister, and we get to delight in the schadenfreude of Shamiko trying to bribe and cajole her would-be vassal into doing her goddamned homework for once. What’s not to love?

While we may have been spoiled with the recent flood of Major Plot Stuff™, I’m happy for The Demon Girl Next Door to spend some time in Cute Girls Doing Cute Things Mode. I’m sure this second season will have plenty more reveals and twists for us to relish in the coming weeks. More than any of that, I’m just praying that the show doesn’t cheat us out of that adorable zoo picnic that Shamiko bribed Momo with. We deserve a cute zoo date, darn it!


The Demon Girl Next Door Season 2 is currently streaming on
HIDIVE.

James is a writer with many thoughts and feelings about anime and other pop-culture, which can also be found on Twitter, his blog, and his podcast.