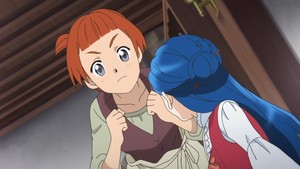 I don’t know whose idea it was to code two of the key characters in this story with the titles of ‘Head Priest’ and ‘High Priest’, but it makes for an absolute headache for someone like me trying to keep textual track of their spots in the story. And that’s without getting into the fact that these titles don’t exactly sync up with the ones used in the novels, nor are they even 100% accurate to what the source text was trying to convey. Suffice it to say, the adoption news regarding Dirk which raised Delia’s fight-or-flight response last week was at the behest of Ferdinand, the Head Priest, rather than Bezewanst, the High Priest, though the latter does still in fact have his designs which come to fruition across this episode. I really oughta commit to just referring to both of those guys by their given names, moving forward.

Regardless, that adoption storyline and Bezewanst’s now-clarified proximity to it continues to constitute the primary plot for this stretch of Bookworm. The business with the ink is but a brisk background detail at this point, down to the fixing agent being finished in a very brief aside bit of narration. The amusing part is how Heidi herself regards this resolution as something of an anticlimax, as fixated on the process behind this as Main is on the results. The more surprising development, then, is how Main actually opts to go along with Heidi’s interest in research subjects for the time, since she recognizes that such investigations could bear fruit for future actual technological developments. Main may be a terminal pragmatist, but it still reflects well on her interactions with others, further pushed as she then gives way to more excitement over ‘Gutenbergs’. That quirk is honestly a pleasing marriage of characterization and the reinvented historical context that drives this show: Sure, Johannes Gutenberg himself gets all the credit for the creation of the printing press, but as shown by how many people have had to come together to actually manufacture things like the metal parts, the paper, the ink, and handle the marketing and sale of the books, that kind of creation really involves a whole lot of folks long-term. It’s another of Bookworm‘s wry historical observations that could probably make it an entertaining story to follow even without inter-church political strife and kidnapping plots.

But hey, turns out we do still have those, and they’re still doing a great job motivating the dramatic movements of the story. You have to marvel at how many intermingled ideas Main has with all the different bits of business she’s managing. Her requesting Ferdinand to look into adoption options for Dirk fails to bear fruit pretty much the way they expected, but has the side-effect of making clear to Main, once Delia catches wind of it, just how much the latter has really come to care for Dirk. With all the different spins this story is putting on potential contention over adoption plots, both for Dirk and Main, both involving some of Bezewanst’s behest, it makes for a more appreciable spin of its own: Delia, an orphan, finding the meaning that comes with ‘family’ not from being adopted by parents, but by herself being tasked with taking care of an even younger child, also an orphan. It produces the most genuine happiness in Delia we’ve seen in ages, and perhaps explains, if not excuses, the mistakes she stumbles into later in the episode.

These more dramatic developments are the result of those intertwining story efforts I’ve found so easy to praise about Bookworm these past few weeks. At first it seems like some outsider Noble trying to force their way into the city is only a reminder of Bezewanst’s scheme, an indicator of how important keeping Main’s presence concealed still is at this stage. But then we slowly unravel the details about the information on Dirk’s devouring that Delia relayed to Bezenwanst, unwitting of how relevant it truly was to his interests, and get a reminder of that outside-noble adoption-technicality parts of his scheme hinge on. It all truly embodies the ‘Ominous Developments’ that lend their title to this episode, even if the disturbing way everything’s coming together hasn’t made itself clear until poor Main (and Tuuli!) has been stuffed into a sack and hauled off by the end of this episode. It works as dramatic irony for the viewers alongside the simple drama of the characters involved, as we can absolutely see how Delia’s heart was in the right place in how she went to Bezewanst for help in adopting Dirk, and how it even reflects on her ongoing growth in wanting the best for her new little brother. It’s not her fault the dude just happened to be one of the least trustworthy religious leaders in fiction (which is really saying something!).

Alongside the prompted plot twists, these developments also work because they’re performing the magician-like feat of misdirecting our attention with other thematic aspects like those aforementioned ones involving Delia. Even if it’s under the stress of kidnapping threats, having to hole up with her family provides another opportunity for Main to reinforce the love she has for all of them. You can see how her willingness to eventually acquiesce to Ferdinand’s adoption request, if it leaves her family safer, is reflected in Delia’s efforts for Dirk, and the lengths many of us would go to for such loved ones. And this plot thread even finds time for a little more world-building, dipping into more details of the gate-guarding system and how knights must be involved when dealing with nobles. To say nothing of the sly humor in Main being advised to think about finding someone to marry right before Lutz walks in. Adorable. It’s impressive how these lighter, simpler elements actually keep us on our toes before the shocking realization of the Main-napping, and makes for an impressive demonstration of how a show as often low-key and steeped in informational vignettes as Bookworm can still regularly end on agonizing cliffhangers, as it’s done for several weeks straight now!


Ascendance of a Bookworm Season 3 is currently streaming on
Crunchyroll.

Chris is a freelance writer who appreciates anime, action figures, and additional ancillary artistry. He can be found staying up way too late posting screencaps on his Twitter.