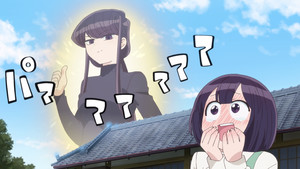 I know this should somewhat be expected from a relatively laid-back slice of life anime, but this episode really doesn’t have that much to talk about. The first skit was a relatively simple one, with Najimi basically forcing Tadano to go play in the snow at Komi’s house. I will say that I really love the skits that don’t rely on any dialogue at all because it hammers home the fact that you don’t always need words to properly convey an emotional atmosphere. Then we get the exact opposite of that, in the form of a snowball fight with middle schoolers boasting designs that are way too distinct for them to just be one-off characters, so I look forward to when the show gives them their own focus segment. I will admit that the punchline didn’t really work for me that much in terms of humor even if I thought Komi bonding with the kids was relatively sweet.

The second half of the episode focuses on Komi coming to visit her family again for New Year’s. I get the gag with the whole introduction being almost exactly like how it was the first time we saw it, but just because I get it doesn’t mean that it was that funny. I feel like the skit about the playing cards was supposed to be the comedic highlight of the episode, but it wasn’t able to hit me that hard personally because I know next to nothing about the game. This isn’t a condemnation though, as the fault more so lies with my lack of knowledge, and I was still able to find humor in how serious the game was treated and how the grandmother almost seems to encourage gambling from her granddaughters. The final skit focuses on the resident country bumpkin of the show and while it’s one of the more predictable interactions we’ve seen so far, it still worked. Even at its most simple and mundane, Komi Can’t Communicate still manages to have just enough depth to keep you emotionally invested.