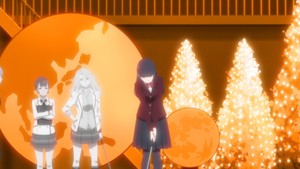 Birdie Wing blazes new frontiers as Eve braves her most daunting challenge yet: minigolf. Jokes aside, this episode sews up any concern I had about the series maintaining its momentum into this new and decidedly less criminal arc—and I didn’t have many concerns to begin with, considering the simplicity of the solution. All Birdie Wing had to do was maintain its goofy tone and bash in the basic tenets of golf as an institution with whatever club it could find. Even with a school uniform and a curfew, Eve continues to do precisely that, so I can’t be anything but pleased.

Eve, however, is a bit miffed at the whole situation. She flew halfway across the world just to play a round with her rival. Matriculating into a prestigious girls’ academy renowned for its competitively formidable golf club wasn’t anywhere on her mind, and to make matters worse, now Aoi is playing coy with her, kicking their date with 18-hole destiny further down the road. I can tell where Aoi is coming from, though. Eve already stood her up her fair share of times, so I’m not surprised Aoi seems to be taking some small, petty joy in the cleat being on the other foot now. Plus, like she tells Shinjo, Aoi brought Eve here “to be with her forever.” As far as Aoi is concerned, they have all the time in the world to play, putt, chip, get married, etc.

Naturally, Eve doesn’t think about any of this and instead spends her school day scaring/seducing her new classmates with her crass exchange student attitude. It’s a fun exercise that reminds us that Eve is a jerk, but she’s a jerk we (and gaggles of schoolgirls) can’t help but love. While Ichina plays her straight-man role well, even she gets swept up into Eve’s chaos, unwittingly turning into a creepy stalker photobombing the otherwise bubbly mall montage. Birdie Wing, per usual, enhances these off-course outings by fully leaning into their silliness. Eve isn’t just suave; she’s a genuine ladykiller who practically sweeps up a pair of paramours with naught but a few sentences and a gallant swish of her golden locks. The presence of an insert song adds to the delightful cheesiness of the scene, and the impromptu fashion show ticks off another set of important montage clichés. It’s basically every mall date that was ever in an ’80s romantic comedy, and I love how much Birdie Wing owns that.

Of course, we can’t forget that this is a golf girls’ story, so Eve faces off against two veterans, Kuyo and Kaoruko, from a competing academy this week. Putt-putt might not be your idea of high-octane action, yet it proves to be a smart venue in which Birdie Wing can begin to tease what this next arc will have in store for our intrepid heroine. And while I can’t say I’m surprised that the answer is “more bullshit golf superpowers,” I am glad to see it. Somewhere underneath those twintails, Kuyo’s brain can visualize the perfect line for each putt. That, however, isn’t too out there in the grand scheme of Birdie Wing, so Eve easily rustles her jimmies. Kaoruko, meanwhile, can shut off 60% of her senses and enter bullet time, which is closer to the level of ridiculousness I was looking for. She also uses a professional-grade wedge club on a minigolf hole, which I’m pretty sure is against the rules, and thus even more perfect for this series.

The kicker is that this is all a 5D chess gambit from Coach Amuro to make Eve realize that she needs Ichina’s assistance to reach the next level of golfing supremacy. This is more roundabout than the course with the loop-the-loop, but I’m glad Birdie Wing makes space for these mind games among the rest of the absurdity. Plus, on a character level, it’s satisfying to see Eve in real time decide against brute force for once in her life and instead listen to another person’s advice. Part of what makes Eve such a fun character is her stubbornness, but Ichina has plenty of vim and vigor herself, and this entices me to see how they’ll behave as semi-professional partners. Being exposed to tactical thinking (I don’t for a moment believe Eve will ever be capable of any tactical thought herself) is also an obvious next step for her growth as a character, athlete, and ultimate arbiter of the entire world of sports.

As always, though, Birdie Wing‘s command of the tone of its girl-on-girl action remains its most formidable weapon. These are over-the-top psychological battles that just happen to be waged on crummy astroturf. Kuyo’s a prissy prep school student who wants to use her powers of observation to put this cocky upstart in her place, and Eve never breaks a sweat just whacking the ball as hard as possible and making every shot regardless. It’s a bit of a retread of last week’s showdown, but I have yet to grow tired of Eve wantonly destroying the grey matter of “normal” golfers. Kaoruko’s immediately different—Eve actually respects her as an opponent for one—using her coolheaded demeanor to turn the tenor of the match on its head and lead us to the hard-fought draw. I must note that Kuyo and Kaoruko’s appearances, in addition to their puppy-and-master relationship dynamic, are suspiciously similar to Mary and Yumeko from Kakegurui. I’ve already compared the two series, so it’s not too much of a stretch to imagine Birdie Wing really did have Kakegurui in mind when it was drafting its own stupefyingly sapphic sports showdowns.

Before I wrap up, I think it’s time to address the elephant in the country club rec room: this show has to have two cours, right? There’s been no official confirmation of the series’ length, and I’ve been hesitant to even broach the subject out of fear of jinxing it, but there’s no way it can tie up its story in 2-3 episodes. This school arc is just getting started, and there are multiple characters in the OP we have yet to meet. At the very least, I think it’s safe to say the showrunners planned for two cours when writing it, and I can only hope they already got the greenlight for both of them. It’d be tragic for Birdie Wing to remain unfinished. I’m still haunted by examples like Flowers of Evil and Stars Align, two of my favorite anime that never got the second season they deserved. Art of this caliber shouldn’t be beholden to the whims of this industry. All I can do is make like one of Eve’s opponents and pray to the golf gods for mercy.


Steve is a world-renowned golf expert and commentator, but if you just want to read his thoughts on anime and good eyebrows, then there’s always Twitter. Otherwise, catch him chatting about trash and treasure alike on This Week in Anime.