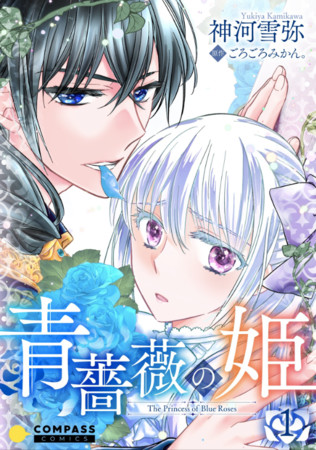 Comikey announced on Friday that it has licensed artist Yukiya Kamikawa and writer Gorogoromikan’s The Princess of Blue Roses (Ao Bara no Hime) manga (pictured at right) from Compass Inc.

The company also announced it has released all of the manga it localizes from Shogakukan‘s Manga ONE website and app on its own app globally.

On the day of her execution, Vyaria wakes up to find time has reversed itself,
making her seven years old again. Thinking of the events of her future, she is truly
traumatized. Her first marriage to King Cain had been a cold and unhappy one. Each time
she made an attempt to get closer to him, she had been faced with rejection, and the sudden
appearance of a girl from another dimension had only increased Cain’s hostility towards
Vyaria. Behind her back, everyone had called her the “Princess of Blue Roses,” after the
flower that symbolizes unattainable wishes.

Knowing she would eventually be sentenced to death by her own husband, Vyaria is terrified
when she is once again united with the young Cain. Is everything going to repeat itself? Is
there really nothing she could do to change the future?

As scared as she is, Vyaria vows to fight against her cruel fate in this second chance at
life…!

The manga adapts Gorogoromikan’s original web novel series, which Gorogoromikan has been serializing on the “Shōsetsu ni Narō” website since December 2019. Kamikawa launched the manga digitally in April 2021, and the manga’s first compiled volume launched digitally in October 2021.