The upcoming Bloodline: The Last Royal Vampire smartphone game will feature an Attack on Titan crossover during pre-registration and for a limited time after launch. Eren, Mikasa, and Levi will be obtainable through in-game rewards during the collaboration period. 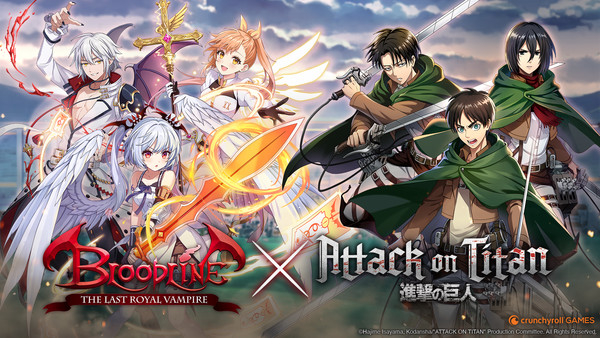 The “retro-style mobile JRPG game” is developed by Shanda Shengqu Games, based on Ai Ou and Su’s Bloodline manhua series. Crunchyroll Games will publish the game worldwide excluding Asia this summer, and describes the game as follows:

Bloodline: The Last Royal Vampire follows the Last Royal Vampire Lilo and her companion Ren in their quest to save their loved ones from a militaristic order called the Holy Land. Players build their own squad of warriors, heroes, and fantastical creatures to defeat exorcists, hunters, as well as vicious demons, and many powerful beings pulling the strings from the shadows. The anime-styled mobile role-playing card game features hundreds of characters and customization, allowing for a roster of heroes that is distinctly unique to each player.

The game launched on iOS and Android devices in China in 2014. A server for English-speaking audiences in Southeast Asia ran from 2015 to 2018.